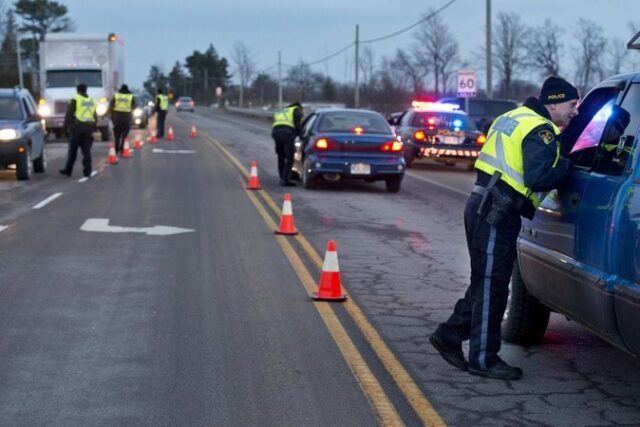 around free from interference by the police. But that was a time long ago

before to the advent of the R.I.D.E. (Reduce Impaired Driving Everywhere)

program. While there is no question that drinking driving exacts a heavy

empowered to randomly detain motorists for the purpose of combating the

tension between civil liberties and our supposed constitutional guarantees to

be free from arbitrary detention and unreasonable search is the Supreme

purposes of a spot check procedure, even if of relatively brief duration,

results in a detention within the meaning of s. 9 of the Charter of Rights. The

court also concluded that such detention is arbitrary in violation of s. 9 even

be stopped and subjected to the spot check procedure. The court nevertheless

authorized such stops based on provincial legislation as being a reasonable

limit within the meaning of s. 1 of the Charter, having regard to the

the perceived risk of detection of motor vehicle offences, many of which

cannot be detected by mere observation of driving. Finally, the S.C.C.

against unreasonable search and seizure as guaranteed by s. 8 of the Charter.

they stop in the course of a random check for drinking drivers. The

subsequent decision by the Supreme Court of Canada in R. v. Mellenthin,

to check vehicles. One of the officers shone a flashlight in the interior of the

appellant’s vehicle, which was considered to be an appropriate action to

ensure the safety of the officers conducting the check point. The flashlight

inspection revealed an open gym bag on the front seat. The officer asked

what was inside the bag, was told food and shown a paper bag with a plastic

sandwich bag in it. When the officer noticed empty glass vials, of the type

commonly used to store cannabis resin, he asked the appellant to get out of

the car, searched the car and found vials of hash oil and some cannabis resin

cigarettes. The appellant later gave an incriminating statement at the police

detachment. At trial the judge excluded both the physical evidence of the

drugs and the statement and acquitted the accused. The Court of Appeal

overturned the acquittal and ordered a new trial. Our Supreme Court

emphatically restored the acquittal reasoning that although RIDE programs

so often occasioned by impaired drivers or by dangerous vehicles their

primary aim must be to check for sobriety, licences, ownership, insurance

and the mechanical fitness of cars. The court authoritatively held that the

an unfounded general inquisition or an unreasonable search.”

(c) The Investigation of Passengers:

passengers questioned in the course of a RIDE check. Recently, a well

been questioned at the roadside and charged with breach of probation. In R.

passengers in vehicles stopped at a R.I.D.E. and run the names through

CPIC to see if anyone was in breach of any conditions”. The judge roundly

denounced this practice: “In the case at bar, I find the violations to be very

serious, in particular the violation of s.8. I say this because of the bad faith

of the officer. The officers were either aware of Mellenthin….or they should

have been. Mellenthin was decided in 1992….. The seizure of identification

from passengers at a R.I.D.E. program has been specifically denounced as a

violation by the highest court in this country and in this province. The OPP

must obey the law. They cannot ignore it. They are sworn to uphold it. But

they do not. This is bad faith because the violation is either deliberate or

through their ignorance. It is necessary to dissociate the Court from ‘the

fruits of this unlawful conduct’. Where the police are acting in bad faith and

motorists in a RIDE program, that detention should be brief and directed

specifically to the issue of the sobriety of the driver. The police do not have

impromptu investigation regarding any of the passengers.

sample of their breath into a roadside screening device. The officer only

body”.  Generally that would be established by the detection of an odour of

alcohol on a motorist’s breath coupled with an admission of consumption.

informed motorist should know that an incriminating reply can supply the

grounds that the officer who is looking for to make the demand. If a roadside

demand is made, the motorist normally isn’t entitled to be informed of his

excluded. During the course of the test it is also necessary for the police to

impaired driving offence). A person faced with a demand to provide a

It is not a crime to take the roadside test and fail. This investigative result

opportunity to exercise that right. Motorists need to understand however that

even if they “pass” the test in the sense that they only blow a “warn”, which

means that they are actually under the legal limit, there are now serious

administrative consequences. Paradoxically, in Ontario your licence will be

immediately suspended (even though the machine has proven your

To make matters worse, these suspensions cannot be appealed. The roadside

device in other words constitutes an essentially unreviewable legal regime

akin to judge, jury and executioner at the roadside. The end result of these

at the roadside, where no criminal offence has either occurred or been

charged, is far worse than the penalties drivers used to get in years gone by

after they had actually been tried and convicted of drinking and driving.

previous
One Toke Over the Line?
next
AT WHAT POINT ARE MOTORISTS LEGALLY IMPAIRED BY ALCOHOL?